The difference between marked and unmarked police cars 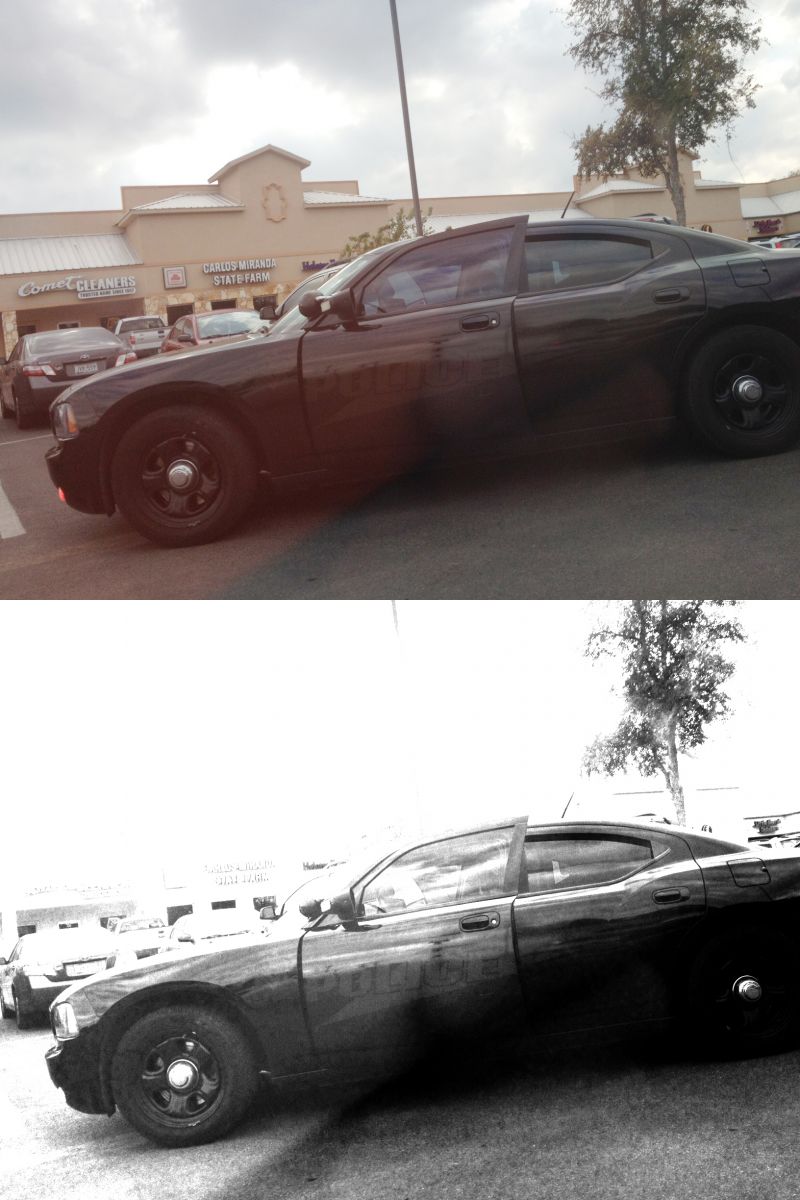 This is another little dirty trick that the police use. I dont know of any law that requires them to issue traffic citations in marked cars, as I see people stopped by completely blacked out and unmarked cars all the time. But whenever an officer testifies to the details of a traffic stop, they always start out their story with "i was at such and such a location in a marked so and so vehicle".

Now this is a photo of a "marked" police vehicle in San Antonio or Helotes (outside of San Antonio). So when an officer testifies to the citations he gave that day, he will always begin with the statement that he was in a "marked" vehicle.

But what is the purpose of the marking? And why are these marking so hard to spot?

Even in the enhanced photo on the bottom,  the marking is almost invisible. What is the purpose of using almost black lettering on a black vehicle? Are they trying to hide? If so, why not just go around in an unmarked vehicle and give out tickets.

There could be some rule that says they can stop someone if they happen to witness a "crime", but the cars that are on patrol doing nothing but giving out citations must be marked.

Obviously when people see a conspicuous police car they tend to slow down, make sure their seatbelt is on, and follow the traffic rules more maticulously then they were prior to seeing the police. So the presence of the police actually can prevent accidents and make people drive more safely. But we all know that they aren't really interested in that - they are interested in bringing in revenue for their city and issuing as many citations as possible.

So if people are going to try to avoid getting caught if they see the police, they have to trick people into not seeing them and continuing to break whatever non-criminal statute they aren't actively complying with.

So they pick a middle ground between marked and unmarked - where they are marked enough to testify that they were "on patrol in a marked vehicle" yet unmarked enough for anyone to actually see the marking.

This is just another example of the fraud that law enforcement conducts on a regular basis to extort money and assert their dominance over their citizens.

Remember these are your employees. You pay their salary, you make the rules that they have to follow, and they are public servants. You are the public and you have the right to take this authority away from them.

Get your accountable authority tee shirt today!
Help keep Accountable Authority protecting the public from the police!
Donate!
Donations help pay for hosting costs and outreach! Or donate with bitcoin:

Officer: Duran, Not sure (NOT SURE.) Chicago Police Department, Chicago IL (CPD) 06/18/2015 Today on my way to the beach with my mother, we saw a dog get tossed out of a car. The dog was thrown onto a lawn and tumbled. The car slowed and never came to a complete stop. After the dog was thrown out of the passenger side window, the car sped up away. My mom began sobbing as I ran out of the car and grabbed the trembling dog. We were shocked that someone could be so cruel. At this point,... more...

Officer: Davis , Mary (INVESTIGATOR ) New York Attorney Greivence Committee 8th district , Buffalo NY (NY AGC8t) 05/17/2015 A legit complaint made against a mentally unstable district attorney. This committee is supposed to review complaint on any license attorney of New York. Since I shown mich evidence to prove it. This lady stated its not there capabilities to investigate. When the D.A. is obligated per United States Department of Justice to deal with issues of the local police corruption and also kidnappings. Both... more...

Officer: Semple, Craig (INVESTIGATOR) New York Attorney Greivence Committee , 8th District NY (NY AGC8t) 05/17/2015 I have made proper complaints to this agency against the District Attorney Michael Violante of Niagara County befpre and was lied to by investor Mary Davis stating they don't deal with a District Attorney. I called this guy said they deal with any one license to practice law in New York. He says now other nonsense. Covering for the back of him. Knowing the obligation that the District Attorney is... more...

Officer: Arcara, Richard (DISHONORABLE JUDGE) United States District Court Western Region of NY, buffalo NY (U.S.D.C.) 03/23/2015 I filed a legit case to The United States District Court Western District of New York in Buffalo New York. On September 12, 2014. Dishonorable Judge Richard Arcara . Has dismissed it. Making up false allegations, also put the conplaint under a false filong nature of suite as a 550 prisoner civil rights. When I was nlt a prisoner and it had nothing to do with any arrest. Clearly this judge is... more...

Officer: Kozak, Chief Bryan (CHIEF) Chey Wyoming , Cheyenne WY (P D) 02/08/2015 I was moving on May 25, 2013. Juan Carlos Mesa Barria broke into my car and broke into a locked box which contained 6 years of savings so my husband and I could buy a house. He stole every penny over the cost of the house leaving only enough to buy house. Any other thief would have stolen the entire box contents. On May 27 he had another accidental opportunity to get in that box. A simple... more...

Officer: Services, Warrants (UNKNOWN/REFUSED TO GIVE) Niagara Falls Police Warrants Division, Niagara NY (N.F.P.D.) 08/29/2014 At about 12:00 PM August 28, 2014, I went to the warrants department as told by the police officer who did attempt making proper police report, Clearly they are changing and messing with it. Or disregarding it totally. More like the guy at the desk at warrants department at 12pm does not know the laws or his job. He should have badge and license to carry weapon revoked indefinitely. Due to... more...

Officer: Violante, Michael (D.A.) District Attorney, Niagara NY (D>A.) 08/27/2014 Complaint on District Attorney of Niagara County Michael J. Violante The Attorney General said try to go to the D.A. if the police and the internal affairs are corrupt. I have called numerous times left messages no response in person they just say the DA is not there to take report. It is a police or family court matter. exactly proof they disregard laws just like the police and the State Police... more...

Officer: Nunley, Trey (65) Sheriff's Department, Rutherford TN (RCSO) 08/27/2014 Case # 69435 My father, suffering from a mental disorder, threatened to stab me with a screwdriver. Then my father called someone, to this day I still don\\\'t know who. (I suspect the neighbor) The argument my father had initiated that morning continued. I directed my mother to call the police. The Rutherford County Sheriff\\\'s Department arrives, I report my father\\\'s crime to deputy Michael... more...

Officer: Wojtsaszek-Gariano, Honorable Kathleen (N/A) Niagara Falls Family Court, Niagara Falls NY 08/19/2014 This is outrageous! A family court out of Niagara Falls New York is corrupted and or just gender biased, maybe my religion, maybe they are just against me in general. I know I have sent multiple complaints, to the wrong office on my mistake. I thought the 8th judicial Conduct since an office in Buffalo I could drop my complaint there, dealing with this courthouse. Now only they have acknowledged... more...

Officer: Violante, Michael (DA) District Attorney, Niagara Falls Niagara NY (D.A.) 08/14/2014 I keep requesting something be done about this international parental kidnapping clearly the D.A. is ignoring and refusing to do absolutely anything. Maybe due to the fact I am proving that the NFPD is corrupted. They clearly are trying to cover each other. So I attempted one last time to request and they just send me to voice mails. A waste of time and pointless to even attempt. No responses... more...

Officer: Barrett, Toney (306) 08/11/2014 Officer Tony Barrett stating he followed two neighborhood kids who where throwing rocks entered my home without knocking, and walked into my bedroom.. the children closed the door behind them and went to get there mother. He informs the mother that if they where doing. After the mother agrees not to let the incident happen again, officer Barrett says "OK get the f**k out and don't let me see... more...

Officer: lewis, chris (?) 46, slayton/murray MN (buffalo ) 08/08/2014 I spelt some things wrong on my last compalaint so im gonna rewrite it.im on probation ,he showedup at my apt and said lets go for a drug test I said ok.when we got there he kept asking when i used last I said over a yaer .he said he didn't believe me and continued o asking questions about othwer people and grilling me about lieing .he was mainly looking for meth.when I asked what the test came... more...

Officer: lewis, Chris 46, slayton/murray MN (buffalo ) 08/07/2014 He halled Me in for a drug test cause I'm on probation and belittled me and didn't believe me when I said I wasn't using.he asked for my meds and gave me shit about how many I was on and if I should be driving on them.kept calling me a list.I passed the rest at the jail.and cause I thought he would tamper with it I went an hour later to the hospital and paid our of my own pocket for a drug test... more...

Officer: Abanilla, Rolando (NOT KNOWN) Park Rangers, San Diego CA 08/05/2014 Officer Abanilla and his partner were responding to a complaint of loud noises coming from our campsite in the Cleveland National Forest. We rented it for the weekend and were in the middle of nothing but tree's and shrubs. We had a DJ playing music till about midnight but that ended and the noise had subsided. Officer Abanilla and 2 other rangers and 6 homeland security officers descended... more...